Kathy grew up on a farm. She and Mike joked that someday they would have a petting zoo. In Nov. 1994, they found the perfect farm nestled along the banks of the Rock River in Jefferson, WI. Their move with their two young sons was shortly followed by the purchase of a horse, then dwarf goats, then a little red ‘Irish Grazing Pig’. Rosie O’Pig she was named. She grew to over seven feet long and over 600 pounds and was ever so sweet. Many years later she died; her absence on the farm was notable. A few years later, in searching to replace her, the KuneKune breed of pigs was discovered. A much smaller pig, also a grazing pig, and it was available in orange! The boys are grown and gone. We still have horses and mini donkeys, and the dwarf goats, and now lots of KuneKunes; our own, private, petting zoo. 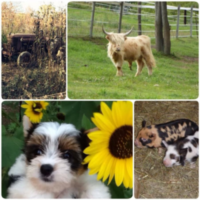